A circulation fan system is used not only to break up temperature stratification and create more uniform conditions from one end of a poultry house to the other – but just as importantly – stir fans are used to increase the level of air movement over the litter to aid in moisture removal. A proper circulation fan system gently moves air across the litter while ensuring chickens or turkeys are not being chilled. As that air moves across the litter, it picks up moisture from the litter to be exhausted out of the poultry house. It is a very practical and efficient way to cut heating costs in poultry houses drastically in the winter time and also improves in-house conditions overall. 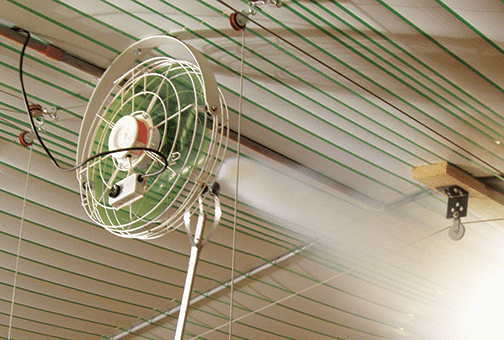 Stir Fans generally produce air speeds in the neighborhood of 50 ft/min so as not to cause harmful drafts on the birds. Ideally, circulation fans should operate continually to maximize moisture removal but may need to be temporarily turned off when the timer fans operate if they interfere with the air circulation pattern created by the air inlets.

One of the biggest concerns when it comes to controlling litter moisture is how to do so while keeping heating costs to a minimum. Though it will always take some amount of heat to control litter moisture during cold weather, how much depends to a large extent on the performance of a house inlet system. If a house is tight, air exchange rates will be more closely controlled and air entering through the inlets will be maximized, which in turn will lead to better conditioning of the incoming air as well as better utilization of both supplemental heat and that produced by the birds.

Though at times controlling litter moisture may seem like an impossible task, with proper management of incoming air and house relative humidity, it can be done. Proper litter management will result in better environment for the birds and ultimately better health and performance. Click to learn more about Double L Stir Fans and improve your poultry house environment conditions.